While blues and rock form our foundation, R&B, funk, soul, rockabilly, surf, Motown, fusion and original music might creep in to a Carolina Rex set depending on the venue. With a hugely varied repertoire, Carolina Rex always delivers a family-friendly show - and can change genres on a dime to play to the crowd.

As a four-piece, Carolina Rex focuses on aggressive blues and rock. When Jacqui joins the guys on vocals, a whole world of funk, r&b, and soul opens up and the bluesy four-piece morphs into a funky and danceable five-piece. 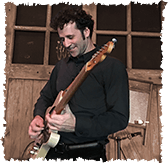 Alec graduated from Berklee College of Music (Boston) in 1989 with a major in Music Production and Engineering and a minor in Guitar Performance. During his 10 years in Los Angeles, he auditioned for the Red Hot Chili Peppers (Dave Navarro got that gig), gigged at a ton of L.A. clubs, and worked in recording studios. He later married Jacqui (Carolina Rex's female vocalist) and settled into Asheville, NC. His iPod holds Abba, Zappa, and everything in between. Seriously. Everything. 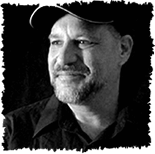 Garry has been performing Blues, Soul and Americana music originals and covers for over 20 years. Whether touring with big acts or singing in local venues, his soulful vocals and bluesy harmonica stylings have helped pack the dance floor and rock audiences until the wee hours. Garry has several recordings out as well as being a session player for other music projects and has toured with the Fabulous Thunderbirds, Delbert McClinton and performed at Merle Fest and other festivals in WNC and beyond.

Andy has donned many hats during his musical career. He grew up listening and playing 60s and 70s rock like Hendrix, Yes, Jethro Tull, the Kinks, King Crimson, and of course Rush. After a brief excursion into "hair metal" in the 80s he fell in love with the blues, specifically John Lee Hooker, Muddy Waters, Buddy Guy, Willie Dixon, and Little Walter. In college he studied jazz under a stellar faculty at University of Tennessee including famed author Jerry Coker, former Jazz Messenger Donald Brown, and author/performer/ educator Mark Boling. As a jazz guitarist he studied the styles of many players including Wes Montgomery, Kenny Burrell, Barney Kessel, Tuck Andress, Charlie Hunter, Joao Gilberto, and Baden Powell. He formed a jazz trio in 1998 called "Klarcnova" and released two CDs of his compositions. In 2002 he started playing klezmer music and adapted the chromatic harmonica to the clarinet styles of Naftule Brandwein, Dave Tarras, and the liturgical music of the famed cantor Pierre Pinchik.

His bass career really started when he met up with a group of young klezmer musicians at Klezkanada in Montreal in 2004 forming the band "the Lithuanian Empire". The band toured Canada playing the Ashkenaz Festival in Toronto, Quebec's 350th anniversary, the Markham Jazz Festival, and was featured on CBC. Their debut CD continues to sell briskly. Aside from klezmer bass players like Stuart Brotman and the various bass players from the Klezmatics and the Klezmer Conservatory Band, his style is inspired by Geddy Lee, Tony Levin, Chris Squire, Aston "family man" Barrett, Sting, Bootsy Collins, and James Jamerson.

Marc started playing drums on telephone books at age 11. By the time he was 13 his folks realized he was pretty bad at sports - and he really really wanted a drum set! After spending a few youthful years playing along to some of his favorite records, it really wasn't very long until he started playing in local bands, out in clubs at the age of 17, and getting an education on how to deal with stage fright. A few years of live seasoning cured that forever. He has since performed a wide variety of styles and in just as many environments, from Florida to Ohio and then New York.

Playing in Country Rock band Bucking Strap in Cincinnati had Marc in front of larger crowds opening for the likes of Lyle Lovett, Clint Black, Timbuk 3 and many other notables. He had a lot of fun playing Surf Rock with The Pods. Later on, he recorded several albums and toured with Indie Rock favorites Fakebrain from NY. More recently, Marc recorded the Debut EP of the Brian Boggess Group in NYC where he was also gigging with wonderful singer-songwriter and artist Pal Shazar. Pal and her husband Jules Shear (also former Asheville-ians!) are two of Marc's all-time favorite songwriters, so it was a dream gig indeed! Now, he finds himself relocated from the big city to his new home Asheville, very excited to play fun music with cool people for nice folks in a great town!

Jacqui has been making a living with her voice her entire career. While working as a dialogue coach for children in sit-coms in Los Angeles, Jacqui honed her skills as a voiceover actress. She has lent her voice to TV and radio commercials, cartoons, toys, TV shows, films, radio imaging and even an attraction at a theme park in Europe.

After marrying Alec (Carolina Rex's guitarist), technology allowed them to leave L.A. and move to the gorgeous mountains of North Carolina. Working from a small recording studio in their basement, she is able to digitally connect with clients, advertising agencies, and other recording studios worldwide.